When you are an aspiring pescatarian/vegetarian, Austria is NOT the place to visit. True, the breakfasts are amazing. Ok, the pastries are amazing. But one cannot live on apple strudel alone. Maybe you can. But you really should leave room for some chocolate Mozart balls. I may have brought back several bags back just so I could say, “Would you like to lick a Mozart ball?”

I have always been a picky eater, which has been previously dissected here. Speaking of dissection, as a child I would pick apart Miss Daisy’s tuna casserole, to extract the carrots and onions, even though she would grate the onions in a vain attempt to sneak them past me. I would then trade the carrots with my sister, who was doing the same with her peas. In fact, I blame my food paranoia on Miss Daisy and her sneaky attempts to convince me zucchini bread is a dessert, and Shepherd’s pie is not disgusting. Of course, when I tried to go pescatarian and she would cook chicken, her logic was that chicken isn’t meat. So who knows what kind of shenanigans she was pulling between the ages of 1 and 7 when my siblings finally started to educate me as to her dark arts.

Currently I won’t eat pork, lamb, veal or lobster. I don’t eat cute baby animals. Lobsters aren’t cute, but my dad used to cook them often and after racing them on the floor, he would dump them in the lobster pot and open the lid to tell me they were screaming. Yeah. Thanks for that, Dad. Not traumatized at all.

Austrian food is basically breaded veal and pork. Fish is more rare than finding Mike Pence at a gay pride parade. My first night in town, because many restaurants are closed on Monday, I opted for a burger at the Hard Rock Café around the corner from my hotel. Here I had my first taste of Austrian beer (quite good). What baffled me was watching everyone around me eating their burgers with a fork and knife. Bread and all.  How do you even cut through all that? I wasn’t going to try. Let them stare at me like I’m a cavewoman. I could still pass as Canadian.

On day 3, when I went on my wine tour, we stopped for a lunch at an “authentic” Austrian restaurant. My tour mates ordered the veal and pork schnitzel. I was delighted to see a fresh lake trout on the menu. Until it arrived. Panic set in. How the hell does one eat this? It’s staring at me.

Now I felt guilty again. I contemplated just eating the berry things and drinking my wine. Fortunately a moment later, the waiter came back and asked me if I wanted him to cut it up for me. I felt like a stupid American who must have looked totally disgusted in order for the waiter to treat me like a small but chubby child. But no. He whipped out this satchel of scalpels, speculum, and other surgical devices to slice that sucker up with the precision of Meredith Grey. It was actually quite tasty without the eyeball.

My quest to find non-meat meals was quite the challenge. I had a tasty shrimp pizza, with a generous heaping of weeds on top. Dining solo in a crowded restaurant is the worst part of traveling alone. I always feel the servers are annoyed that one tourist is taking up a table for two. I didn’t care though. I finally found a good Italian restaurant and damn it, I was going to sit there for 2 hours and enjoy real food. I ordered a beer and garlic knots. My server seemed annoyed, as best I could decipher from his minimal English. Or it could be that I just think German sounds rude all the time. My pizza arrived and I ordered another beer. The waiter came over with his cash pouch (they cash you out right at the table in Vienna) and thought I was done, but no, Gunther. By now you know I’m American, and I want dessert. And a glass or two of prosecco. And I won’t just tip you a few Euros. You’re getting 20%. Don’t be a dick and I’ll treat you like an American.

One of the “must do” experiences in Vienna is eating at the wurstelstand. Basically it is a food cart with 20 kinds of sausagey artery-clogging products. I

know what you’re saying…you don’t eat pork. But I was going to have a beef frankfurter. I was going to soak up the local ambience by eating a cheap lunch on the go like a local, only wearing a decidedly non-trendy North Face parka. This is what it looks like. Basically they take a 15” baguette, jab it on a pole, squirt ketchup and mustard in the hole, and then jam in a skinny 8” hot dog. I felt violated watching the whole process. After you finish the frankfurter you are left with half a dry baguette. I just pretended to be a sloppy eater and dropped hunks of bread so the pigeons could eat it. I still felt dirty trying to eat it.

One night after my 12 hour Russian tour, I didn’t feel like going out to eat. It was about 9 pm and I just decided to stop in at McDonald’s and get some fries. I heard 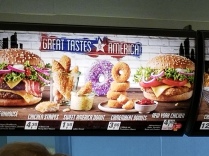 some English speakers behind me and turned around to find the New Jersey couple from the tour behind me. They had the same idea. Where else to go at 9 pm on a Saturday night? We had a good laugh at the menu of “All-American delights.” I know Camembert bites are big in my neck of the woods.

Trip Advisor pointed me to an English bookstore/pub near my hotel another night. I was so happy to be among English speakers, even if they were showing Austrian handball on tv and apparently still operated a bootleg Blockbuster in the basement. Fish & chips with malt vinegar were worth the weirdness though.

Finally on my last night I made it to one of the restaurants I had identified as having a diverse enough menu that I might be happy. I looked at the menu outside and there it was….turkey schnitzel and apple strudel. I had heard about the elusive chicken schnitzel, but it was harder to find than Waldo. I was finally going to have an authentic Austrian meal. The restaurant also had a tiny table for one in a window alcove. It seemed like the perfect location to reflect and soak up my final night in Vienna. Ok, so the view was of the Holocaust memorial. A little depressing. But at the same time, it was very peaceful at night. Somehow, after 9 nights, it seemed like I was finally getting to relax. Just 12 hours before I had to go home. 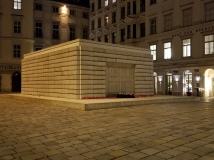