Not to be outdone by my vacation last year which involved 3 countries and 36 hours without sleep, I approached my trip to Austria like it was one of those Advent calendars filled with tiny bottles of wine. Just in case one day sucked, I could look forward to the next day. My ambitious itinerary involved 9 nights in Vienna, with day trips to Budapest, Prague, Hallstatt Austria, a wine tour of the Wachau valley, along with 7 Christmas markets, 2 palaces, 2 art museums, and one amazing bakery.

Budapest
On my first full day in Vienna, I departed at 6:45 am for my minibus tour to Budapest. It was raining, and colder than I expected or planned for. I forgot my hat and gloves and was jet lagged. I was a bit cranky. The tour guide was Czech (I think). I say this because he was a bit grumpy and hard to understand. My tour included a couple from Texas whose son ironically went to the same small college I went to near my house. For some reason, they thought Connecticut was charming, so I can only assume they were products of the education system under Governor George W. Bush, you know, reading books upside down. I had an empty seat next to me for Gramps. I met a lovely man from Toronto who helped ease the stress of deciding if this trip was a good idea. There was an empty seat next to me for Gramps, which was a good thing, because the Asian woman in my row was wearing enough perfume to choke me. 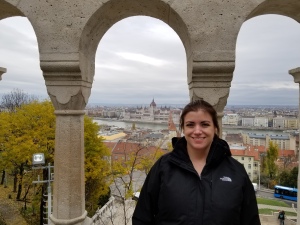 The van dropped us off at various tourist spots to wander around. It was beautiful, but felt rushed, and I was just out of sorts all around. Lucky for me, one of the Budapest Christmas markets opened the day we visited and that was where our “free time” happened to be. My first mulled wine was quite enjoyable, even if there was a stall of cooked baby suckling pigs stacked 12 high. I nearly threw up. My bad mood was getting worse. With about 2 hours to kill, it started to rain harder. I tried to duck into a few shops (including a massive H&M) to escape the rain, but it wasn’t cutting it. I found an Irish pub with a handful of people in it. It had no wifi. Hungarian handball was on the tv. The bartender acted like he never encountered an English speaking person. I thought of apologizing for Trump, but it was pointless. At least the Hungarian beer was cheap. I was not loving this trip. I headed back to the hotel meeting place early, and wasn’t the only one very early. There I received the bad news that my trip for Prague the next day had been cancelled due to lack of the minimum participants. I had to rearrange it to one of my last days. Don’t they know they were undermining my planning? 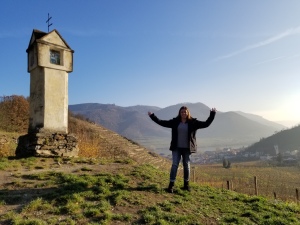 Two days later, I was feeling much better about this trip. I decided to head to Melk Abbey and the Wachau valley wine region. Instead of a hotel pickup, I had to find my way across the river to the departure spot. The concierge at my hotel gave me wrong directions and I almost missed it. Thankfully Google maps worked in Vienna (unlike Amsterdam). My guide was Mario from Lake Como, Italy. That instantly gave him credibility that he knew wine, but I was skeptical he knew Austria. The tour also consisted of a long-distance dating couple from Sydney, and a gay doctor couple from Singapore. Interesting crew. I got to ride in the front passenger seat, but there was still a middle seat for Gramps.

This tour was the highlight of my trip. Probably because it involved 5 bottles of wine for 5 of us at lunch, followed by 4 bottles at another winery, and a stop at a specialty liqueur shop, where I bought a bottle of violet schnapps (later confiscated at the airport), and apricot whiskey jam and chocolates for Miss Daisy (which were potent enough to make her more pleasant.) I can handle my wine pretty well from decades of experience and daily liver detox pills, but I was hammered on this tour. The group was lively and fun, and spent a great deal of time asking me to explain Trump and just how bad it would be for the world. Despite this dark discussion, we still had a good time. I learned three important lessons. First, when someone asks you what you think of red wine, you can never be wrong by swirling the glass, sniffing the air and thoughtfully saying, “I get a hint of cherry.” Second, Brad Pitt’s favorite wine is Gruner Veltliner from this region, and he is worshipped among the locals for showing up at wine festivals in the area.  Third, the world can say a lot of disparaging things about Americans, but you can’t say Americans don’t tip well. I felt bad for Mario, who really gave us a great tour experience and I was the only one to tip the guy. I decided I was going to be a one woman American goodwill tour and overtip everyone I encountered after that. It’s the least I could do since we’re going to start WWIII.

Hallstatt, Austria
Hallstatt has been called the most picturesque village in Austria, and maybe even Europe. It is so popular that the Chinese have built a replica of the village in China and are obsessed with it. The tourist signs are even written in Chinese. There was one tour group offering a day tour from Vienna. It was about 4 hours one way. What I didn’t know was that the tour group was Russian. There was one American couple from New Jersey, but everyone else on the bus was Russian, including this overweight Russian mafia guy who was manspreading over Gramps’ seat and shoving his stuff into my space. I didn’t want to say anything though, because it would have been very easy for the Russians to push me off a cliff at the photo opportunity spot. It just didn’t seem worth it. 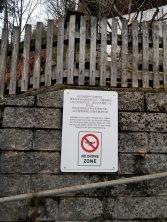 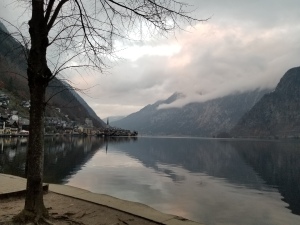 Hallstatt was totally worth the long drive though. It was an overcast day, having had the first snow the night before. Just enough to top off the peaks of the Alps, but not enough that my chainsmoking bus driver would lose control of the bus on a windy mountain and plunge us into a ravine. The village is quite small, but I still found a good pizza and the local brew was fantastic. The village is dying though, because there are no jobs, and I imagine the lack of roads and steep cliffs make it less desirable to live there. I wouldn’t mind though. Aside from the buses of Chinese tourists, it seems isolated enough that I could be happy there. It would be more cardio than I’m used to hiking up the steep paths and stairs, but I’m sure the payoff of some hot Austrian man who could teach me to yodel would be worth it.

Prague
The day after Hallstatt, I had a 3.5 hour ride to Prague. My guide for this was actually a Hungarian named Balasz. This tour had 2 American couples and a single woman from London. So at least the Americans could be obnoxious and not be judged. You always see tour groups in big cities like this with a gimmick, like “follow the yellow umbrella” or the Japanese flag, or a giant flower. We had Balasz and his man bun. The walking tour of Prague wasn’t so great. Kafka’s house was under renovation. 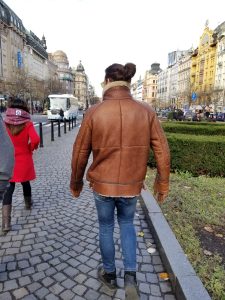 The Astronomical clock was about to go under renovation. The market square was jam packed, even for November. The Charles Bridge was wall to wall people so you couldn’t fully appreciate the views. The Prague Hooters was down an alley and looked too sketchy to check out. I did manage to find a Christmas shop (because I still had room in my bra to smuggle home some gifts). By the end it grew very windy and cold and started to rain. I was ready to go home. My one regret is that I didn’t stop at an Absintherie. I was a bit afraid I’d need medical attention and didn’t want Balasz and his man bun to leave me stuck in Prague. 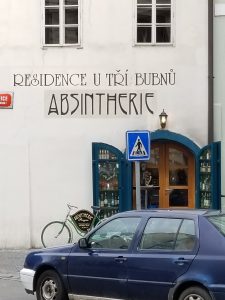 One thought on “Viennese Backup Plans”