It is true that I obsessively plan my vacations. It involves large table sized maps, little army men and ships—just like the intense planning of the D-day invasion. Ok, so it’s really just a game of Risk. But there is a lot of research involved, once I finally decide on a destination. Which usually involves a lot of wine, a random travel site post on Facebook, checking statistics on single men in said country, and impromptu Expedia searching.

Of course, before I actually get on a plane, I have to consult a psychic to make sure I won’t die or be kidnapped. The psychic assured me that not only would it be a lovely vacation, but my grandfather in spirit was excited to join me and visit the museums. Perfect. Not only would it be a safe vacation, I was hanging with Gramps as my own guardian angel.

In the days leading up to the trip, I started wondering if I would be bored alone in Vienna. I’m not a big Mozart fan. I booked a couple of day trips and planned to visit 7 Christmas markets. But I still wasn’t sold.

I boarded my Austrian Airlines flight and headed for my seat. I began to panic as I got closer to an oversized and rather grumpy looking Austrian man. Huzzah! I was in the row behind him. They started playing Mozart and Strauss waltzes. Very soothing, and better than the weird Bjork Icelandair soundtrack. A woman came and sat in the window seat next to Grumpy Johann, and after 2 minutes, got up and sat in the empty row in front of him. They closed the door, and I was delighted to have an empty seat next to me. Well, really it was Gramps’ seat.

The flight took off, and I started noticing a smell. It was a bit like a Hickory Farms gift basket. Grumpy Johann stretched his arms in the air and there it was. The worst B.O. I’ve ever smelled. No wonder the woman got up and moved. I tried to turn away and look around to distract me. Austrian Airlines makes their flight attendants wear polyester red dresses with red tights and red shoes. That is way too Spiderman. Hmm. Young Austrian men are quite attractive. I had always considered Scandinavian men the Holy Grail of the aesthetic gene pool. I’d overlooked this country, but based on my flight they jumped right into a tie with Sweden. Still, as I sat there with my nose buried in my giant travel pillow, I realized that young Austrian men may be delicious eye candy, but old Austrian men smell like schnitzel, cigarettes and B.O. Is there deodorant in Austria? I don’t want to gag my way through this trip. Not an auspicious start.

When The Longest Flight Ever finally landed, I managed to get on the shuttle bus, which dropped me off at the bus stop near the hotel. My hotel was only accessible by stairs in 3 directions. I tried to reach the shortest set of stairs with my massive suitcase, which required walking past 4 drunk boys, sitting against a wall at 9 am on a Sunday. They asked for money. (I think. Maybe sex. I don’t speak German.) I just kept walking and they laughed. I was hating Vienna. Found my hotel, and only pulled 2 muscles in my back going up the stairs. And it started raining. Day 1: Vienna 1, Danielle 0.

Day 2 was much better, despite getting lost. I wanted to go see Gustav Klimt’s “The Kiss” at the Belvedere Palace. I watched “Lady in Gold” on my flight back from Iceland last year, and I think Ryan Reynolds was in my subconscious when I decided on Vienna. I’ve never been much of an art aficionado, but I do love history and Ryan Reynolds, and I find it somewhat surreal to view some of the epic works of art ever created. I’ve seen Rembrandt’s “Night Watch”, and Van Gogh’s “Starry Night.” And now Klimt. It kind of balances out the Icelandic Phallological Museum. 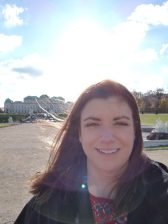 It wasn’t until I returned to the hotel that night and was looking for photos to post on Instagram and pretend I was having a grand time when I noticed something amazing. In every selfie I took in the Belvedere Gardens there were magnificent orbs. Gramps was making his presence known. Even though I walked about 4 miles out of the way and was still unsure about this trip, it was quite reassuring. But somehow I didn’t think Gramps was really a Klimt fan.

One thought on “Do I smell schnitzel?”