One of the things I wanted to do in Iceland was ride an Icelandic horse through the lava fields.  Iceland’s terrain is often described as a moonscape, but by people who’ve never been to the moon. There’s craters, and rocky black soil, but also bright red clay and moss. There aren’t any trees like you would call trees. I think they decorate scrub brush for Christmas.  Icelandic horses aren’t big horses either, more like ponies. Aside from their size, Icelandic horses have one or two extra gaits from other horse breeds around the world. I didn’t really care, I just wanted to ride a pony in a really picturesque environment…

When I informed Miss Daisy of my plans, the conversation went something like this:
Me:  “I booked a horseback riding tour through the lava fields.”
MD:  “You can’t ride a horse.”
Me: “It’s not like a real horse, more like a pony ride at a fair.” (Google image searching…)
MD: “It’s still bigger than you. You’ll be sore for days.”
Me: [Resisting the urge to make a joke about size.] “I’ll be walking like 5 miles a day, I’ll be sore anyway.”
MD:  “You can’t walk down a flight of stairs without getting winded.”
Me:  “But this is sitting on a horse. I can sit.”

I was not going to be discouraged. I scheduled it for 6 hours after I landed, so it was the first relaxing thing I had planned to soak up the Icelandic experience.

My tour group involved a single girl from Seattle, an engaged couple from Chicago (which really bummed me out because the guy looked like an actor from All My Children and a Hallmark Channel Christmas movie), and a couple from China who had been traveling the world for 2 months. I learned that the Chinese guy had never even seen a horse, even a mechanical one at the mall, so I figured I wouldn’t be the worst one in the group.

Our instructor was a typical “horse lady”. You know what I mean.  She began by going around the room asking our experience with horses. There are photos of me as a child on a pony ride at a fair, and as a 5 year old sitting with my sister on a horse at a family friend’s farm. Naturally I said I’d ridden horses a couple of times when I was much younger. Plus, animals love me so much I’m like St. Francis of Assisi. That reference didn’t go over in Iceland. I think my humor doesn’t translate well, a fact that was reinforced pretty much everywhere I went.

With this information and a bunch of riding instructions which were so complicated I forgot them within 30 seconds, I was handed a pair of waterproof fireman pants as we would be going through water.  I point this out because they were men’s pants, which bunched up around my waist. So don’t just think I look fat in the pictures.

We were led outside to talk to our horses with their Icelandic names that sounded like a lot of vowels strung together.  I couldn’t understand how the Chinese couple was struggling with the names since their language is a bunch of scribbles.  Of course, Chicago guy was given the white horse. Very funny, Universe.

Then the instructor introduced me to my horse, whose name sounded like “Toaurrrrrray” with a rolling R. I could never roll my Rs in French class. My mouth just won’t do it. I think I could do better with German, or a language that sounds more like throat clearing.  I asked her to repeat it and must have given her a “Whatchu talkin’ ’bout Willis?” look.

Ok, that sounds nothing like what she called him. I settled on Touré (Tour-eh), like Manchester City’s Yaya Touré.  It turned out to be appropriate given that my horse was moody and lazy but with spurts of reckless abandon. (Sorry for the Premier League reference, but it’s true. And if you do understand it, then it’s pretty funny.)  It wasn’t until we exchanged emails for the group photo that I learned his name was Dorri. Just like Taurus without the S.

After my comedic attempt to climb on the horse set me off in a fit of laughter not well received by the horse handlers, I received some instructions.

“So Touré/Dorri is a bit strong-willed.  Don’t let him eat grass, he will test you with this. Pull the opposite rein. He needs some extra coaxing to tölt (the Icelandic gait), but hold onto him tight or he will just do what he wants. Don’t let him push you around.” 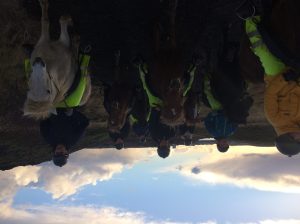 Excellent. Everyone else has a mellow horse, and I get the “special” one. Everything was going smoothly and I started to relax from my stressful morning. I was in Iceland! Riding a horse! In the freezing cold! Through lava fields! And snow capped mountains! How freaking cool is this?

“Ok, now we’re going to tölt everyone. Remember to hold on to Touré/Dorri!”

Wait….why am I the only one getting special instructions? Everyone’s horses tölted away, one by one in a line. I did the special coaxing to get Touré/Dorri to go and he began to trot. Then BAM! Touré/Dorri took off for the front of the pack, almost throwing me out of the seat. He repeated this at the next tölting straightaway.

We bonded though. After a few neck massage rewards (for him, not me, although I was having fantasies about the very pretty Chicago guy).  Touré/Dorri also doesn’t like water.  I couldn’t blame him though, as that water was freezing and up to his privates.  One by one the horses followed the leader into the water. But not Touré/Dorri. He would go as far over to the edge as he possibly could. I was fine with it because at times I wondered if he was too old for this shit and was unsure of his footing. 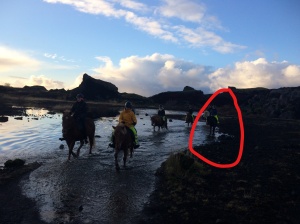 Oh fuck. My concerns for his age were misplaced, as he took off like American Pharaoh, passing all of the other amateurs blindly obeying their leader.  He would respond to me when I yanked on the reins and stop short of crashing into another horse’s ass.  But then he’d be like “Squirrel!” and bend down to eat grass, nearly throwing me.  It was a game we bonded over.

It wasn’t until the last tölting stop that the instructor told me he wasn’t tölting. Nice of you to tell me now. I can’t see his feet and I’m not Icelandic, so I don’t know what the fuck he supposed to be doing.  The two helpers riding at the back to make sure no one got lost couldn’t see this? I was mad, but then I thought Touré/Dorri was a bit of a rebel and if he wants to pretend he’s racing at Belmont, then God bless him.  Let him run.  Maybe I’m the only fun he’s had all week.

When we got back to the stables, it had rained, flurried, the sun came out, a rainbow appeared and it rained again, all in 90 minutes.  We were told to dismount and give neck massages (again to the horses, not Chicago model man).  I stopped massaging to take some selfies and Touré/Dorri started licking my hand. 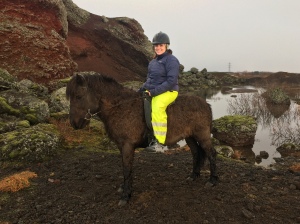 See? Animals do love me. I think he appreciated me letting him be a rebel.